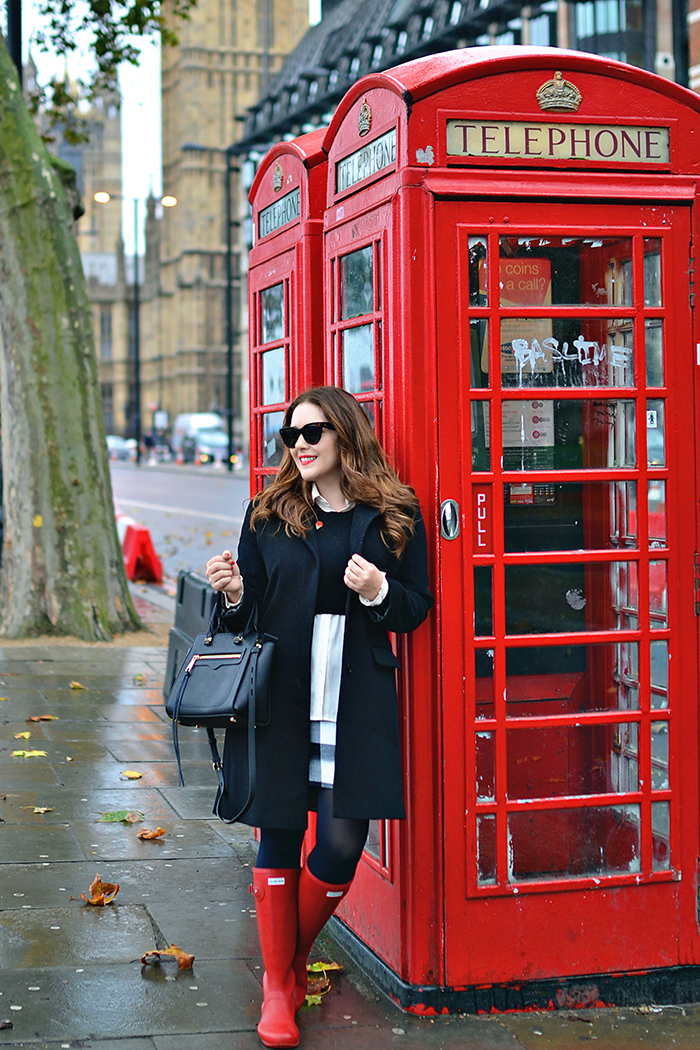 coat (last season, this season’s here) // sweater (old, similar) // blouse (similar) // skirt (on sale!) // tights // boots // bag // sunnies
This past weekend I made a quick, impromptu trip to London. I love London, so any excuse to go, or a cheap flight, and I am there. Since I’ve been to London numerous times and seen almost all of the major sites, I decided that I would fill my Saturday with some of my favorite things in the city. It ended up being the perfect day in London! Well, except for the weather, which was actually perfectly-awful London weather.
I stayed with my friend Mike who joined me for my “perfect day in London” and who was willing to help me take lots of photos. We started our day on the Westminster Bridge, which makes a wonderful photo overlooking Big Ben and Parliament. Unfortunately, the second we made our way on to the bridge it started raining. We found ourselves battling not only the rain but also strong gusts of wind. Determined to get at least one good shot, we fought the wind and rain, destroying my umbrella in the process. I ended up with two decent photos and about 100 hilarious outtakes, which I promise to share at some point.
After succumbing to London weather (my poor hair), we made our way Regent Street so I could get my J.Crew fix, not before making a quick stop at Fortnum and Maison to stock up on my favorite Earl Grey tea. Have I mentioned Mike is the nicest most patient friend lol? After trying on everything in J.Crew, we headed to the colorful Neil’s Yard and to explore Covent Garden. We stopped at Laduree in the Covent Garden Market to refuel before carrying on to London’s Financial District.
The Financial District is one of my favorite parts of the city. It is full of very old, and very London-looking buildings. Think Harry Potter. In fact, parts of Diagon Alley were filmed in this area. This particular section of London is one of the oldest in the city. I love the way historic buildings sit in between and around modern skyscrapers. The star of the show is definitely the Leadenhall Market. It is a gorgeous Victorian-style covered market that sells fresh fruits, veggies, and flowers (on week days) as well as housing high-end commercial stores. While the current building was built in the 19th century, the market dates back to medieval times.
After strolling the market and the adorable surrounding streets, we made our way back to St. Paul’s Cathedral for my absolute favorite tea and scones in the city. In my opinion, the cafe in the crypt (yes, crypt) of St. Paul’s has the best scones and clotted cream in town (served fresh everyday at 3 pm, and you’ll want to get there as close to 3 as possible, they do run out). Even Mike, who is a local, agreed it was an excellent scone and authentic Cornish clotted cream.
Despite the fact that I have been the British Museum a dozen times, I can’t stop myself from going. It is free of charge (they ask for donations) and there is no line to enter. So after our delicious scones, Mike and I headed to the museum. I insisted on going, especially when I discovered Mike HAD NEVER BEEN! Naturally he loved it and promised he would return to visit the museum properly when he had more time. One can never have enough tea in London, so when the museum closed, we met up with my friend Angela at the cutest pink and blue French bakery, Maison Bertaux.
By this point our phones were telling us that we had walked more than 13 miles! I had no idea we had walked so far because, unlike Mike’s, my feet weren’t hurting at all thanks to my comfy Hunter Tour Boots (they never let me down and they are so easy to pack). We decided to call it a day and head back to Mike’s part of town (he lives just outside the city) for a yummy pie at his favorite pub.
What are your favorite things to do in London?
SHOP THE POST: