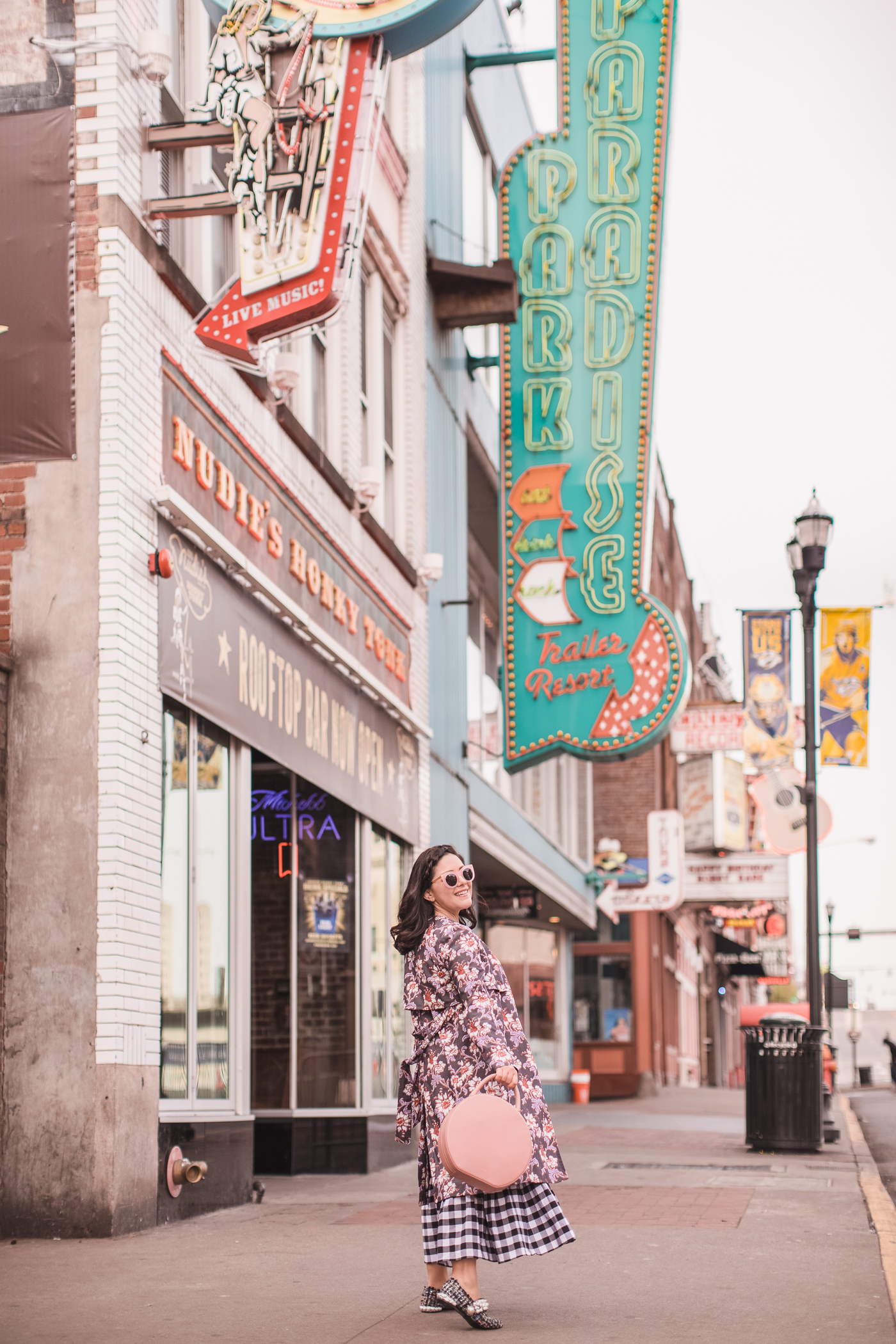 I was searching for a new city to explore when Allie suggested Nashville. Since I could (pretty) easily drive to Nashville, we decided it was the perfect destination for a quick, impromptu girls weekend. While I liked Nashville and I would say that overall it is a great mini-getaway, I don’t think it is a city I would ever pick for a longer vacation.

Despite only being in the city for a weekend, Allie and I decided to make the most of it and we pretty much tracked down every insta-worthy cafe, street, shop, and restaurant in Nashville. Obviously, the famed Broadway street in downtown Nashville is a must-see. However, both Allie and I preferred the cuter, trendier neighborhoods that surround the city-center, specifically the Gulch and 12 South.

DOWNTOWN
We knew that the rowdy tourists, bars, and honkytonks lining Broadway probably were not our scene. So, we headed downtown early in the morning to appreciate the heart of Music city sans drunken chaos (although it still smelt from the night before). We snapped some pics on the pedestrian bridge (which has a great view of the city) and strolled down famed Broadway. We also stopped at the historic Ryman Auditorium (once home to the Grand Ole Opry) for a little Country Music history (complete with hilarious guitar photo op) and grabbed a quick bite at the historic speakeasy-turned-restaurant, Merchants. Rumor has it that Al Capone actually frequented Merchants when it was a speakeasy.

THE GULCH
After a morning downtown, we headed southwest to the trendy, upscale neighborhood called The Gulch. The Gulch is a great lace to eat since it is home to Le Sel (a gorgeous pink restaurant with an amazing brunch), Biscuit Love, and Caviar and Bananas. Sadly we did not have time to sample all the acclaimed restaurants in this area, but I assure you it is filled with great bars, restaurants, and shopping.

12 SOUTH
We spent Sunday in what would become our favorite area of town, 12 South. This hipster ‘hood is full of restored historic homes, trendy eateries, wall murals, cute coffee shops, and excellent shopping, all within walking distance of each other. We started with artisanal cronuts at Five Daughters Bakery before splitting one crazy Bloody Mary at the Flipside. We then strolled and admired the mural scene before doing some damage at Draper James. Of course, the highlight was stopping for some fresh sunflowers at Amelia’s Flower Truck.

Just outside of town, and another spot you don’t want to miss, is the gorgeous Cheekwood botanical gardens and estate. We went while the tulips were in bloom, which you can see more of here.